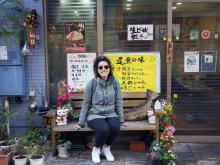 Nicole Teru Quintus received an undergraduate degree in Neuroscience and Cognitive Science in 2017 from the University of Arizona – Tucson. During her undergraduate degree, Nicole assisted in the laboratory of Dr. Nicholas Strausfeld. In his lab, she studied how stomatopods, characteristically reclusive and temperamental sea dwellers, tracked novel stimuli being moved through their field of vision. Additionally, she contributed to the ongoing research of the laboratory’s postdoctoral fellow, Dr. Nikos Lessios.

Following her undergraduate degree and research, Nicole joined the Ferguson Stress and Depression Lab as a research technician. Here, she was introduced to SIRT1, a NAD+-dependent deacetylase that has been implicated in depression pathologies within human populations via single nucleotide polymorphism (SNP) analysis. Her growing interest in the molecular biology underlying psychiatric illnesses led her to enter the Clinical Translational Sciences graduate program as a Master’s student. Her future goals include investigating SIRT1 as a potential biomarker for depression, and identifying other molecules that play a role in mood disorder pathologies.

When she is not engaged in her schoolwork or research, Nicole enjoys traveling, reading, attending music events, embroidery, and crafting jewelry.