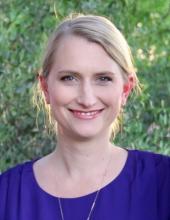 Casey Romanoski received her undergraduate degree in Liberal Arts from the University of Arizona in 2004. Next, she attended UCLA where she trained in the laboratory of Dr. Jake Lusis to receive a PhD in Human Genetics in 2010. Her dissertation utilized systems genetics to elucidate genetic mechanisms governing why endothelial cells isolated from different people exhibit differential responses to pro-inflammatory oxidized phospholipids. Next, she completed post-doctoral training at UCSD in Dr. Christopher Glass’ laboratory. Here, she focused on mechanisms whereby genetic variation among mouse strains directs differential gene regulation as a system to understand functions of the non-coding genome. The discoveries made during these years as a trainee merited first-author publications in top journals, including the American Journal of Human Genetics (2010), Circulation Research (2011), Nature (2013), Cell (2014), and two reviews in Nature Reviews Cell & Molecular Biology (2015) and Trends in Immunology (2015). In addition, Dr. Romanoski received fellowships from the NIH and American Heart Association to fund her training for 9 out of the 10 years.

In 2014, Casey was awarded NIH Pathway to Independence Award for promise as an academic researcher.  In 2016, she moved to establish her independent research program at the University of Arizona as faculty in the Department of Cellular and Molecular Medicine. Since this time, Dr. Romanoski has laid the foundation for a sustainable and impactful program through acquisition of an R01 grant from NIH/NHLBI, recruitment of talented graduate students, and publication of 7 additional articles.

The goal of Dr. Romanoski’s research program is to identify functional genetic variants, genes, mechanisms, and pathways that lead to endothelial cell (EC) dysfunction that is characteristic of inflammatory vascular diseases. Using a combination of experimental and computational tools, the laboratory identifies relationships between genetic variants, chromatin state, and gene expression to elucidate mechanisms that govern regulatory function on the genome-wide scale. This work should accelerate future discoveries in several scientific fields, including human genetic, vascular biology, bioinformatics, and precision medicine.